Pitfalls of blogging and reviewing: An interview with the Fantasy Literature staff

S. C. Flynn on his SCY-FY blog interviews the brain trust behind FANTASY LITERATURE. Their discussion about the inner workings of the review site, the current state of publishing, and nuts and bolts of blogging proved insightful and interesting.

Today I will be talking with the team at Fantasy Literature, which consists of 17 reviewers. They have a rigorous application process for joining the site – and a very lengthy one for potential interviewers, as I have discovered – and all the reviewers work together to produce the site’s content. They’ve been blogging together daily for eight years.

SCy-Fy: Team, I am very pleased to have got this chance to speak to all of you. Firstly, tell me about a typical blogging day.

Kat Hooper: My blogging day starts at about 7:45 am, when I’m overseeing my kids getting off to school and before I get ready for work. As the managing editor, I usually make the decisions about which reviews to post each day. I usually post two or three reviews each weekday. They’ve been edited in advance by Jana Nyman, Ryan Skardal, or Kelly Lasiter.

Other FanLit folks do most of the feature columns that we run at noon (EST) most days. These are:

After posting the day’s reviews, I do my real job – I teach neuroscience, psychology, and research methods courses at the University of North Florida. My commute is at least 40 min, so I read by audio during that time. After my classes, I usually check in on the blog a few times to see what’s going on. Later, I do my own reading and review writing and whatever kind of maintenance/oversight the blog needs. There’s a lot of planning and talking with authors and publicists, etc that goes on, but we all do that kind of stuff together. I spend only a very small amount of time on social media.

SCy-Fy: Hard-to-spot pitfalls in SFF blogging that are difficult to avoid?

Marion: One hard-to-spot pitfall in some ways is the dreaded “spoiler.” One person’s spoiler is another person’s clever detail. Also, in a world where things are recapped instantly, and people are on Twitter commenting on TV and movies as they happen, it’s hard to judge quite what the “shelf life” for a spoiler is. Is it a month after publication? Six months? Never? It’s a challenge to strike the balance between giving enough information, and giving away the farm.

Kat: One thing I’d warn bloggers about is those seductive review copies. Everyone loves free books, but if you only review the books that publicists are currently hyping, you’ll end up with three problems.

Bill: Two pitfalls: 1) Assuming that your audience shares your knowledge – they may in fact not be as well read in the genre or sub-genre, or may not be of an age to have read those authors you may assume “everyone” has read.

2) Lack of diversity/blindness to other world-views.

Read the rest of the riveting interview at SCY-FY. 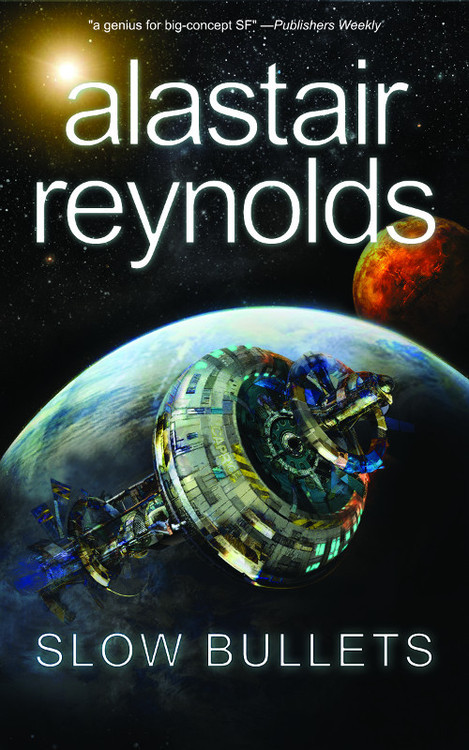 As part of a Scy-Fy interview, S. C. Flynn asked Christopher J Garcia, co-editor of The Drink Tank (2011 Hugo winner for Best Fanzine), about which upcoming releases he was most looking forward?

Tough call, and more than anything I’m waiting for Archie Comics written by Mark Waid and drawn by Fiona Staples, but I can’t wait for the new Alastair Reynolds, Slow Bullets. I’m really excited to see what Uncanny Magazine does. The first issue, which I was a part of, was Amazing!

Read the rest of the interview at Scy-Fy.

For more about Slow Bullets, visit the Tachyon page.