DIGITAL RAPTURE combines the best of science fiction – the thoughts, ideas, and possibilities – with excellent storytelling 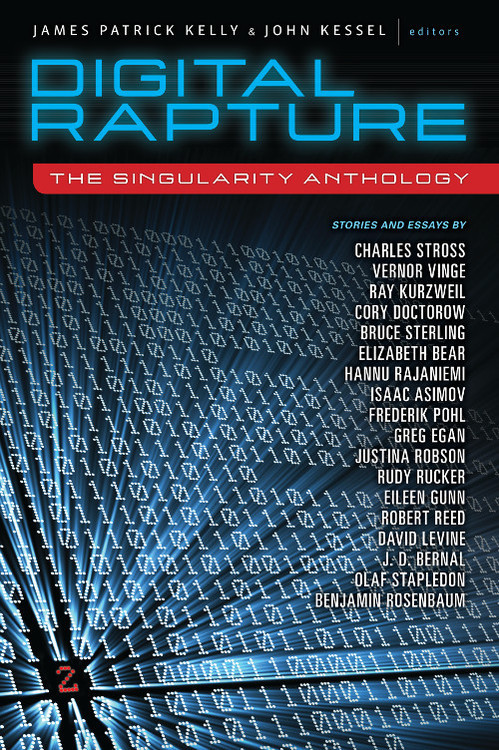 Digital Rapture is an anthology that does this particularly well. It deals with one of the most mind-boggling of mind-boggling scientific questions: the question of consciousness, of our humanity, of what we used to be and what we might one day become. In short, it deals with the Singularity: the possibility that through technology, artificial intelligence, biological enhancement, or a combination of them, human beings will gain greater-than-human intelligence and exceed their capacities today. After all, there was a time when we weren’t even human, before we evolved to be what we are today. Who knows what we’ll be one day?

And Digital Rapture does a pretty damn good job with imagining the unimaginable. It’s the kind of anthology that opens your mind so far that your brain feels like it’s going to fall out. Collecting both stories and non-fiction from a number of scientists, science fiction writers, and thinkers, including luminaries Isaac Asimov, Olaf Stapledon, and Vernor Vinge, as well as Cory Doctorow, Charles Stross, and Ray Kurzweil (among many others), it speculates on the myriad possibilities of the Singularity. It delves into more issues than could be named, among them questions of individuality, human responsibility, and human identity – and does so with depth and feeling.

Furthermore, in addition to all the intellectual depth and the exploration of ideas that many of these stories provide, there’s also quite a bit of good fun, humor, and suspense to them. Many a story kept me reading late into the night, engrossed by the mystery, adventure, or just plain wit and verve of many of the tales. With the exception of the aforementioned dense and abstract tales, the majority of the offerings in this anthology combine the best of science fiction – the thoughts, ideas, and possibilities – with excellent storytelling.

Read the rest of Klimchynskaya’s review at Blogcritics.

For more information about Digital Rapture: The Singularity Anthology, visit the Tachyon page.

The Bruising of Qilwa was shortlisted for the 2023

It's a Goodreads Giveaway! US residents can enter

Happy Birthday to Karen Joy Fowler! Fowler is the