To say I was surprised when I began working on the stories in LED ASTRAY would be an understatement. I’m still not an “urban fantasy, werewolves-vampires-zombies” kind of guy, but I will definitely be reading more Kelley Armstrong stories in the future. What I discovered is that a number of the stories are written within Ms. Armstrong’s existing series’ universes – actually only ten of the collection’s twenty-three stories are “standalone”; all the rest fall within her existing series. So I would read a very cool story like “Learning Curve,” and then six stories later I would encounter some of the same characters in “The List.” The characters are so deftly written that when I came upon them again in another story it was like meeting up with old friends already.

One of my favorites, albeit a standalone story, is “Last Stand” – unexpectedly, at least for me, a zombie story! It’s a typical zombie story, in one sense: following a virus outbreak, soldiers in a fort must fight for their survival against the “Others.” The well-drawn, strong female protagonist, Monica Roth, was a chemistry teacher before the outbreak, and now serves as commander, doing her best to keep the “last band of resistance fighters” alive.

How “Last Stand” differs from the typical zombie story is…well, let’s just say if I tell you, then I will completely spoil the experience of reading this story. You’re just going to have to trust me on this one: go order LED ASTRAY: THE VERY BEST OF KELLEY ARMSTRONG from Amazon or wherever you prefer to purchase books, and read this story – and the twenty-two others in the collection – and be amazed.

Read the rest of Halpern’s comments about LED ASTRAY at MORE RED INK.

For more information on LED ASTRAY: THE VERY BEST OF KELLEY ARMSTRONG, visit the Tachyon page.

Nobody combines cowboys and terror like Joe R. Lansdale 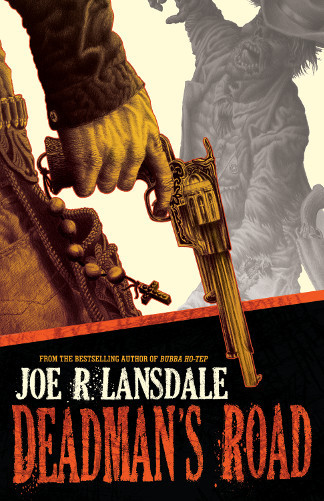 Nobody combines cowboys and terror like Joe R Lansdale. Meet Jebidiah Mercer, the most badass, gun-totin’ preacher to stalk the shadowy back-roads and byways of the haunted American West. Awesome.

For more on Deadman’s Road, visit the Tachyon page

Cover art “The Quick and the Undead” by Travis J. Elston.