The raves for COLD IN JULY keep on coming

Cold in July the movie, which recently played at Cannes and opens in theaters and VOD on May 23, and the original novel, currently available at all finer booksellers, continue to garner praise.

Recent reviews of the book:

“The read is incredibly good. If the movie closely follows the book, and one gets the idea it will from the forward written by film director Jim Mickle and the afterword from the author, it should be one heck of a movie. Cold In July is one heck of a read and very much worthy of your time.”
—Kevin’s Corner

“In the Afterword, Joe R. Lansdale says, "No novel has ever come to me more full-blown than Cold In July.” The end result is a perfect story, well-told, start to finish. I enjoyed every word.“
—Horror-Web Cesspool 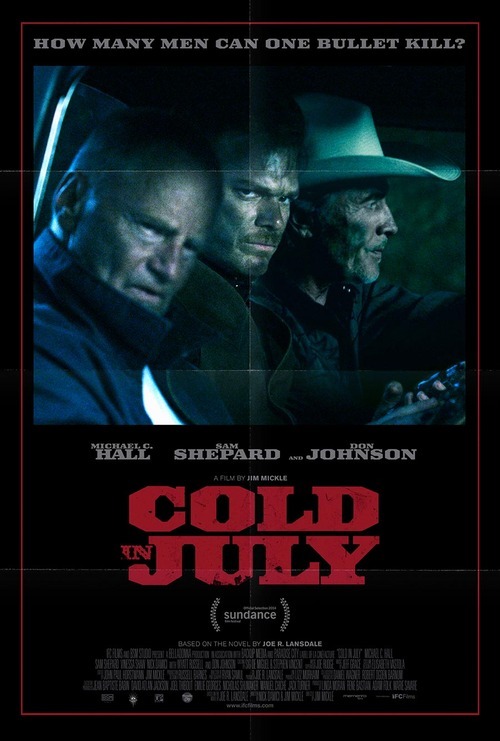 And for the movie:

”[I]t’s a gripper from start to finish, because of Mickle’s lean style, and because it’s impossible to know in the first five minutes where the movie will end up.“
—Los Angeles Times

"In “Cold in July” — starring Michael C. Hall as Dane, Sam Shepard as his victim’s vengeful father and Don Johnson as a pig-farming private eye — Mr. Mickle, 34, uses blood to punctuate psychological horrors in a film with a literary heart and more mainstream allure.”
—The New York Times

“For reasons which passeth understanding, cinema has long overlooked Texas-born crime writer Joe R Lansdale. His books are lean, grimly comical and packed with the sort of sudden violence, boisterous anti-heroism and crackling dialogue that Hollywood producers claim to love, but somehow, short of the atypical ‘Bubba Ho-Tep’, his work has remained un-adapted – until now. ‘Cold in July’ is Lansdale in excelsis, a relentless tale of small-town treachery spiralling into bloody vengeance. And in the hands of ‘We Are What We Are’ director Jim Mickle, it’s become one of the year’s best indie thrillers.”
—Time Out London

“Who is who shifts and as much as Jim Mickle tickles us in Cold In July with conventions, he also molds his very own imposing scenes to add to the genre. A close-up of a painting in a living room at night in East Texas in 1989 sets the mood in his inventive fathers and sons, gangsters and detectives thriller. Three unlikely male Charlie’s Angels transcend revenge.”
—Eye For Film

“Michael C. Hall brings a shell-shocked vulnerability to his portrayal of Dane that contrasts perfectly with the grizzled "badasses” portrayed by Sam Shepard and Don Johnson. Directed with an excellent eye for the visual poetry of noir, this pulpy, southern-fried mystery is a throwback to an older breed of action films; one where every punch and shotgun blast opens up both physical and spiritual wounds. Cold in July is hard to shake as an east Texas summer.“
—Broadway World

The movie tie-in edition of Cold in July is NOW (or should be soon) available from all finer outlets.