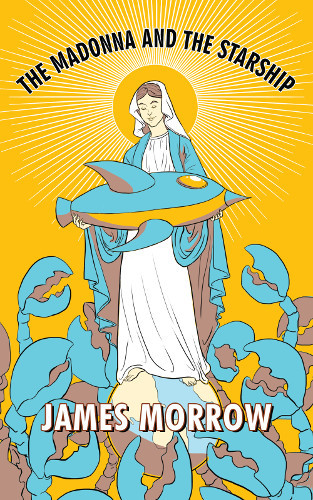 With the aide of the fine folks at Goodreads, we’re giving away an advanced reader’s copy (ARC) of The Madonna and the Starship, a new novella by the award-winning James Morrow.

In the golden era of sci-fi TV, why were alien crustaceans so darned literal? Beloved 1950′s star Uncle Wonder must create the ultimately irreverent television show — else lobsters from outer space will inflict their death-ray on an unsuspecting viewership.

It is New York City, 1953. The new medium of live television has been kind to young pulp-fiction writer Kurt Jastrow. Not only does he enjoy scripting a popular children’s space opera, Brock Barton and His Rocket Rangers, he also plays an eccentric tinkerer on Uncle Wonder’s Attic.

But Kurt’s world is thrown into disarray when two extraterrestrial lobster-like creatures arrive at the studio. Certain that the audience for a religious program program represents “a hive of irrationalist vermin,” the shellfish scheme to vaporize its two million viewers. Kurt and his co-writer have a mere forty hours to write and produce an explicitly rational and utterly absurd script that will somehow deter the aliens from their diabolical scheme.

For more on The Madonna and the Starship, visit the Tachyon page.
Cover and design by Elizabeth Story.
Book Riot discusses women in horror with Ellen Datlow Charles de Lint declares “there’s not a dud to be found” in the massive TREASURY OF THE FANTASTIC