Tachyon titles were included on many a pundit’s list for the best publications of 2015. Here’s a selection of five such rankings. More to come over the next several days.

In Hannu Rajaniemi’s collected short fiction, godhood is a plague, the city of Paris woos a Finnish man, a record chain’s logo is a dense symbolic capsule, and stories occasionally read you while you read them. Mixing myth, fairy tale and hard science fiction in dazzling proportions, these stories are mind-blowing, engrossing revelations of which I can only speak hyperbolically. From Finland to the farthest reaches of outer space, Rajaniemi weds vast scope to marvelous intimacy in prose reminiscent of a ringing glass bell.

BEA’S BOOK NOOK mentioned LED ASTRAY: THE BEST OF KELLEY ARMSTRONG on her Top Ten Books I Read in 2015.

This anthology really showcases Armstrong’s strengths and her diversity plus I enjoyed the stories from her established series that gave us new perspectives from secondary and new characters as well as brand new stand-alones.

BOOK CHASE named THE ESSENTIAL W. P. KINSELLA as the number one fiction book of the year.

It is a difficult concept to explain to non-fans of the game of baseball, but there is a strong feeling of kinship between hardcore lovers of the game.  Kinsella is one of those people,and it shows in the beauty and sweetness of his baseball stories.  The man is a master short story writer and, thankfully, many of his stories are about baseball.  This collection covers the entire Kinsella range of writing – and it is wonderful.  Not just for baseball fans

Without comment, FANTASY LITERATURE included THE VERY BEST OF KATE ELLIOTT among its favorite books of 2015.

Also without comment, SHOTGUN LOGIC named Ellen Datlow’s THE MONSTROUS as one of the best anthologies of the year.

For more information on LED ASTRAY: THE BEST OF KELLEY ARMSTRONG, visit the Tachyon page.

For more information on THE ESSENTIAL W. P. KINSELLA, visit the Tachyon page.

For more information on THE VERY BEST OF KATE ELLIOTT, visit the Tachyon page.

For more information on THE MONSTROUS, visit the Tachyon page.

Here’s your chance to win THE ESSENTIAL W. P. KINSELLA, a collection of “small marvels”

In conjunction with the fine folks at Goodreads, we are giving away a copy of The Essential W. P. Kinsella, a career retrospective that celebrates the 80th birthday of the great scribe.

“[Starred review] The career of the incomparable Kinsella (Shoeless Joe) is beautifully represented by these 31 short stories, including, of course, “Shoeless Joe Jackson Comes to Iowa,” the haunting tale of a baseball fan’s obsession with a long-dead star that was developed into a bestselling novel and then the film Field of Dreams. Other charming baseball fantasies include “The Night Manny Mota Tied the Record,” in which a fan agrees to sacrifice himself to bring back the recently dead Yankees star Thurman Munson, and “Searching for January,” which concerns an encounter with the deceased Roberto Clemente. Alongside these stories are several more realistic and mostly gentle satires, such as “The Fog,” that present the escapades of several indefatigable members of Canada’s First Nations. “The Grecian Urn” concerns a couple who can inhabit the interior worlds of great works of art. “K Mart” is the touching tale of three boys who use baseball to escape from their unhappy lives. Kinsella is a masterly writer of short fiction. Though his first-person narrators, mostly men much like himself, can become a bit repetitive when the collection is read straight through, each of these works, whether fantastic or realistic, is individually a small marvel of the storyteller’s art.”
—Publishers Weekly, starred review

“There are likely to be surprises for everyone in The Essential W.P. Kinsella. But those who know Kinsella’s work only from his baseball stories are going to get the biggest and best surprise of all.”
—Book Chase

“This book’s publication should bring readers back to the once very popular Kinsella, now 79, and one hopes it attracts new readers as well.”
—Booklist

For more info about THE ESSENTIAL W. P. KINSELLA, visit the Tachyon page. 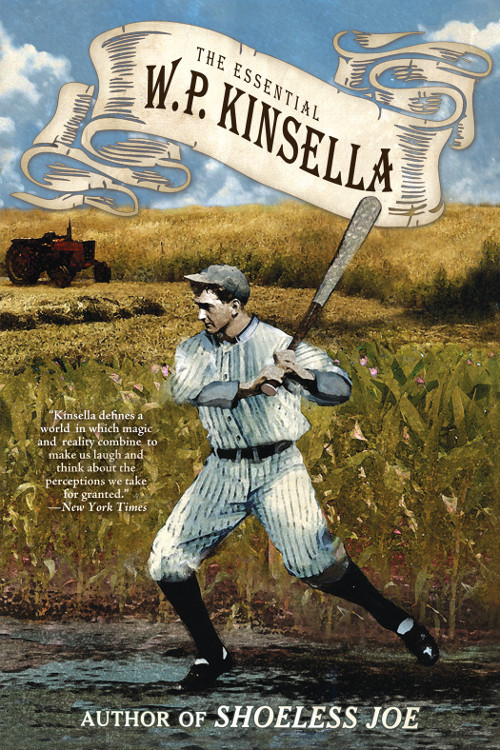 I will be forever grateful to W.P. Kinsella even if he never publishes another word because he is responsible for one of my favorite books of all time,Shoeless Joe.  That novel, of course, subsequently morphed into what is one of my favorite movies: Field of Dreams.  And now, thanks to the remarkable new collection of Kinsella’s short stories (published in celebration of the author’s approaching eightieth birthday), The Essential W.P. Kinsella, I have finally read the short story that started it all, “Shoeless Joe Jackson Comes to Iowa."

The author himself had a hand in choosing stories for The Essential W.P. Kinsella,and fans of his baseball stories and First Nation stories will be pleased with the number of each type chosen for inclusion. The baseball stories may magically touch on tragic figures such as Roberto Clemente and Thurman Munson, but the tales spend just as much time in the low minors with players who are unlikely ever even to sniff life in Triple A ball, much less the majors.  The Indian stories portray the unexpected humor of life on the reservation – humor that is often more of the "sometimes you have to laugh so you don’t cry” variety, than not.  There are likely to be surprises for everyone in The Essential W.P. Kinsella.  But those who know Kinsella’s work only from his baseball stories are going to get the biggest and best surprise of all.

Read the rest of Sattler’s review at Book Chase.

At the Book Chase, Sam Sattler discusses The Essential W. P. Kinsella as part of his “Short Story Saturday” feature.

I will be forever grateful to W.P. Kinsella even if he never publishes another single word because he is responsible for one of my favorite books of all-time, Shoeless Joe.  That novel, of course, subsequently morphed into what is one of my favorite movies of all-time: Field of Dreams.  And now I find out that the novel itself was preceded by a short story titled “Shoeless Joe Comes to Iowa.”  I only recently learned about the short story because it is included in a brand new collection of twenty-seven Kinsella short stories (The Essential W.P. Kinsella) that I’ve been reading.

Although not all of his stories are about baseball, it is baseball stories for which Kinsella is best known in this country, and I’ve selected one of my favorites of those for “Short Story Saturday.”

“The Night Manny Mota Tied the Record” takes place in Dodger Stadium on August 7, 1979 during a game between the Los Angeles Dodgers and the Houston Astros.  During that game, one fan, without once leaving his seat, is going to have an experience that will change him forever.  An old man takes the seat next to our fan and begins talking about the funeral of Yankee catcher Thurman Munson who had died just five days earlier when the great catcher crashed the small airplane in which he was flying home for a short break from the pressures of Yankee baseball.

Read the rest of Sattler’s comments on the story at Book Chase.

“This was superb and I’m in awe of Tidhar’s

Did somebody say #werewolfwednesday? 🐺 . “Com