Explore hidden histories with Tim Powers in THE BIBLE REPAIRMEN for only $1.99 today! 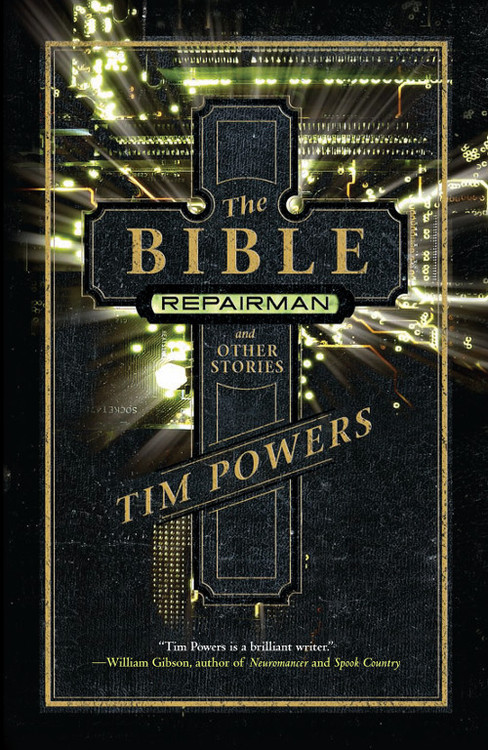 The Tim Powers short story collection The Bible Repairmen and Other Stories is a Kindle Daily Deal for Monday, April 21.

In his first new collection since 2005, Tim Powers, the master of the secret history, delves into the mysteries of souls, whether they are sacrificed on the pinnacle of Mount Parnassus or lodged in a television cable box.

With two new stories and short fiction only previously available in limited editions, the cornerstone of the collection is a postscript to his harrowing novel of the haunting of the Romantic poets, The Stress of Her Regard. After Byron and Shelley break free of the succubus that claimed them, their associate, Trelawny, forges an alliance with Greek rebels to reestablish the deadly connection between man and the nephilim.

Meanwhile, in a Kabbalistic story of transformation, the executor of an old friend’s will is duped into housing his soul, but for the grace of the family cat. A rare-book collector replaces pennies stolen from Jean Harlow’s square in the Hollywood Walk of Fame—and discovers a literary mystery with supernatural consequences. In a tale of time travel between 2015 and 1975, a tragedy sparked by an angel falling onto a pizza shop is reenacted—and the event is barely, but fatally, altered.

“Most fantasy authors aim at persuading you of the reality of their invented worlds. Mr. Powers makes you doubt the reality of your own. Are there still sin-eaters and ghost-talkers quietly pursuing their trade in tenements and behind weed-infested yards, with regular tariffs and specializations? If there are, what do they know that you don’t? That’s what creates a true frisson.”
—Wall Street Journal

“Tim Powers’s first collection of short fiction in over half a decade, The Bible Repairman and Other Stories is a potent six-story collection that plays effortlessly with many of the author’s favorite themes.”
—Green Man Review

“Powers specializes in hidden histories and all of these stories present a very real exterior and another world inside its cracks.”
—Denver Post

“Powers’s first new collection since 2005 assembles five stories and a novella, where he exhibits his extraordinary talent as a fantasist and his uncommon imaginative power.”
—SF Site

For more on The Bible Repairmen and Other Stories, visit the Tachyon page.

Spend your Easter going BEYOND THE RIFT with Peter Watts for only $1.99 Podcasting across the virtual world with HOLLOW WORLD’s Michael J. Sullivan