With the help of the fine folks at the Hugo Award-winning SF SIGNAL, we’re giving a bundle of six terrifying reads.

THE MONSTROUS
edited by Ellen Datlow

Take a deliciously terrifying journey led by the best horror editor in the business. Literary masters of suspense, including Peter Straub, Kim Newman, and Caitlín R. Kiernan, go to a dark place where the other is somehow one of us. These electrifying tales redefine monsters from mere things that go bump in the night to inexplicable, deadly reflections of our day-to-day lives. Whether it’s a seemingly devoted teacher, an obsessive devotee of swans, or a diner full of evil creatures simply seeking oblivion, the monstrous is always there—and much closer than it appears.

WE ARE ALL COMPLETELY FINE
by Daryl Gregory

Harrison was the Monster Detective, a storybook hero. Now he’s in his mid-thirties and spends most of his time popping pills and not sleeping. Stan became a minor celebrity after being partially eaten by cannibals. Barbara is haunted by unreadable messages carved upon her bones. Greta may or may not be a mass-murdering arsonist. Martin never takes off his sunglasses. Never. No one believes the extent of their horrific tales, not until they are sought out by psychotherapist Dr. Jan Sayer. What happens when these seemingly-insane outcasts form a support group?  Together they must discover which monsters they face are within—and which are lurking in plain sight.

THE APES OF WRATH
edited by Richard Klaw

In the Rue Morgue, the jungles of Tarzan, the fables of Aesop, and outer space, the apes in these seventeen fantastic tales boldly go where humans dare not. Including a foreword from Rupert Wyatt, the director of Rise of the Planet of the Apes, this provocative anthology delves into our fascination with and fear of our simian cousins.

“Evil Robot Monkey” introduces a disgruntled chimp implanted with a chip that makes him cleverer than both his cohort and humans alike. In “Murders in the Rue Morgue,” a murder mystery unravels with the discovery of a hair that does not appear quite human. Merging steampunk with slapstick, “The Ape-Box Affair” has a not-so-ordinary orangutan landing on Earth in a spherical flying ship—where he is promptly mistaken for an alien. King Kong sets a terrible example with booze and Barbie dolls in “Godzilla’s 12-Step Program.”

If you’ve ever wondered what makes humans different from apes, soon you’ll be asking yourself, is it even less than we think?

“This is one weird western series you can take to heart.”
—Zombos’ Closet

The Wild West has never seen the likes of Reverend Jebidiah Mercer, a hard man wielding a burning Bible and a bottle of whiskey in the battle between God and the Devil. Frankly, he’s not sure he gives a damn who wins.

As the not-so-good Reverend tangles with a Lovecraftian horror and joins a renegade named Flower to battle a horde of cannibalistic fiends, only this is certain: Mercer’s blasphemous journey is laced with relentless action, terrifying evil, and nonstop humor.

This supernatural epic of the Old West that never was will leave you heartily cheering for the good guys—if you can just figure out who the good guys are.

SHE WALKS IN DARKNESS
by Evangeline Walton

… there is considerable charm in this old-fashioned hair-raiser, and Walton’s focus on history and myth is distinctive.”
—Kirkus

Archaeologist Richard Keyes and his resourceful young bride, Barbara, are expecting a blissful honeymoon in a welcoming new country. But from the moment they arrive in their secluded new home, circumstances conspire against them.

The key to an ages-old mystery lies in the catacombs under the villa, in a familial conflict reawakened after generations of sacrifice, betrayal, and madness. This first publication of a newly discovered jewel from a World Fantasy Lifetime Achievement Award winner is sure to please readers of all genres.

THE STRESS OF HER REGARD
by Tim Powers

“Good serious fantasy doesn’t come much better than THE STRESS OF HER REGARD.”
—Oxford Times

Michael Crawford is forced to flee when discovers his bride brutally murdered in their wedding bed. Yet it is not the revengeful townspeople he fears but the deadly embrace of the malignant spirit that is claiming him as her bridegroom.

Crawford will not travel alone; soon he is aided by his fellow victims, the greatest poets of his day—Byron, Keats, and Shelley. Together they embark upon a desperate journey, crisscrossing Europe and battling the vampiric fiend who seeks her ultimate pleasure in their ravaged bodies and imperiled souls.

Telling a secret history of passion and terror, Tim Powers (The Anubis Gates, Declare, Three Days to Never) masterfully recasts the tragic lives of the Romantics into a uniquely frightening tale. Back in print for the first time since 1994, this newly revised edition of THE STRESS OF HER REGARD will thrill both Powers fans and newcomers to this gripping Gothic tour de force.

For the full details about the giveaway, visit SF SIGNAL.

For more on WE ARE ALL COMPLETELY FINE, visit the Tachyon page.

For more on THE APES OF WRATH, visit the Tachyon page.

For more on DEADMAN’S CROSSING, visit the Tachyon page.

Cover art “The Quick and the Undead” by Travis J. Elston

For more on SHE WALKS IN DARKNESS, visit the Tachyon page.

For more on THE STRESS OF HER REGARD, visit the Tachyon page.

Apes can enjoy a good thriller… no word on popcorn, yet

A still from a short film featuring an aggressive person in an ape suit. The red marks signify the eye movements of an actual non-human primate while watching watching the video. (Image: Discovery/Video: Fumihiro Kano, and Kumamoto Sanctuary, Wildlife Research Center, Kyoto University)

According to EUREKA ALERT, apes are far more discerning than previously thought.

Remember the scene in the classic movie ALIEN, when that creepiest of creatures bursts out of John Hurt’s belly as he writhes in pain? Well, according to a study reported in the Cell Press journal CURRENT BIOLOGY on September 17, great apes are pretty good at remembering and anticipating memorable events they’ve seen on-screen too–even when they’ve seen the event only once.

“When you watch a shocking, emotional event in a movie, you remember the event well, and later on, when you watch the same movie, you anticipate the event,” says Fumihiro Kano of Kyoto University in Japan. “Thanks to a recent advance of state-of-the-art eye-tracking technologies, we could examine event anticipation by great apes while watching a movie by means of ‘anticipatory looks’ to the impending events.”

To find out, the researchers made two short films starring themselves and then showed them to six chimpanzees and six bonobos while tracking their eye movements. In one movie, an aggressive person in an ape suit came out from one of two identical doors. In the other film, a human actor grabbed one of two objects and attacked the ape-like character with it.

The eye-tracking data showed that animals anticipated what they were about to see after a single viewing of the movie. On a second viewing of the first movie, the apes directed their attention to the door where they knew the person dressed as an ape would appear. While watching the second film again, the animals looked in anticipation at the object they knew would soon be used as a kind of weapon, even when that object was placed in a different location than they’d seen earlier.

Read the rest of the fascinating article at EUREKA ALERT.

THE APES OF WRATH swings into academia

At THE GEEK CURMUDGEON, editor Richard Klaw reports that his anthology THE APES OF WRATH is the main text for Dr. Joan Gordon’s class on apes in fiction.

This seminar will look at the portrayal of our close cousins, the apes, in fiction, as allegories, symbols, mirrors of ourselves, and mindful subjects. We will begin by reading selections from the anthology The Apes of Wrath, edited by Richard Klaw, and conclude with the novel We Are All Completely Beside Ourselves, by Karen Joy Fowler. In between, we will discuss relevant short non-fiction readings. For the first class, please read from The Apes of Wrath “The Apes and the Two Travelers” by Aesop, “The Murders in the Rue Morgue” by Poe, and “Tarzan’s First Love” by Burroughs. You might want to prepare by visiting the zoo and eating a banana monkey-style.

More details and the rest of Klaw’s article are available at THE GEEK CURMUDGEON.

For more info about THE APES OF WRATH, visit the Tachyon page. 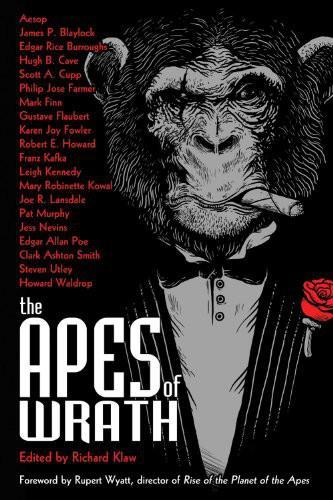 You want Apes of Wrath. RevolutionSF will give it to THREE of you. All you have to do is write ape haiku.

Make it ape sci-fi, ape comedy, ape fantasy, or ape romance. What we want are apes.

Visit RevolutionSF for all the details.

Apes of Wrath sighting in a local library