Will you be returning to these characters and this world in any future stories?

Well, there’s a story that came out four years before “Passing Strange” called “Caligo Lane,” you can find it online [and] read it for free; it’s also in my short story collection, WICKED WONDERS. It takes place three years after “Passing Strange,” but it is a very short story, 3,000 words, and entirely about Frannie’s magical process, in great detail. There’s also a story that takes place two years before “Passing Strange” about Polly called “Hey, Presto!” And I just finished and sold a story called “Pox” for “The Book of Dragons,” which will be out in July. That takes place in San Francisco in 1969, and both Franny and Polly are in it.

I might continue to revisit these characters, except for Emily Netterfield and Loretta Haskel. I will never go back to them, because at the end of “Passing Strange” they go off on an adventure of their own, and [there are] tens of thousands of ways that could go. I’m sure that if I wrote one version of how their lives unfolded, it would not be the same as what someone else imagined. I won’t write about them because I don’t want to close any of those possible  doors.

I’ve never really thought about how the gingerbread man felt in the story. Or even why so many people were chasing a cookie… but this short story definitely gave a new spin to an old classic. There is something in the way it’s written and the intensity of the story that made me go “duh” of course that’s the way that it was.

Nick Mamatas produces the LIT REACTOR column “Ask Nick: Publishing 201”. The most recent column is on the conventions and conferences.

Here’s a question, variations of which I receive all the time, that I have always refused to answer….until now.

I’ve been publishing fiction and non-fiction for years, but I still haven’t landed a book publisher yet. Many writers I know say they got a break meeting their publisher at a convention. I don’t really like conventions and I can only bring myself to schmooze so much. Should I suck it up and try harder, or are conventions not that important to a successful writer’s career arc?
—Wondering in my Rabbit Warren

I hate this question for two reasons—the first is that it is a Publishing 101 question, and I’m answering 201 questions here. The answer is “No.” The second reason is that the question usually isn’t one. Rather, it is a request for permission: “Please tell me I can just stay home.” All right, you can just stay home. In fact, these days, you have to stay home. But let’s say that one day there will be conventions again…

What makes this question interesting is that Warren is pretty interesting: he’s been writing and publishing for a long time, and already attends conferences and conventions with some frequency. So it’s worth breaking things down a bit.

The Hugo
Award–winning editor of ASIMOV’S SCIENCE FICTION, Sheila Williams
started her career at ASIMOV’S in 1982, first in a subsidiary
rights department, then as an assistant and soon after managing
editor. She assumed the mantle of editor in 2004, with the retirement
of Gardner Dozois. Williams co-founded with Rick Wilber, the Dell
Magazines Award for Undergraduate Excellence in Science Fiction and
Fantasy Writing


Williams has edited
or co-edited more than 25 anthologies including 18 with Dozois,
collecting various stories by subject from ASIMOV’S. Some of her other books are TALES FROM ISAAC ASIMOV’S
SCIENCE FICTION MAGAZINE (with Cynthia Manson), WHY I LEFT HARRY’S
ALL NIGHT HAMBURGERS AND OTHER STORIES FROM ISAAC ASIMOV’S SCIENCE
FICTION MAGAZINE (with Charles Ardai), INTERGALACTIC MERCENARIES
(with Manson), A WOMAN’S LIBERATION: A CHOICE OF FUTURES BY AND ABOUT
WOMEN (with Connie Willis), and ASIMOV’S SCIENCE FICTION MAGAZINE 30TH ANNIVERSARY ANTHOLOGY.


All of us at Tachyon wish the extraordinary Sheila an amazing birthday!

For more information on THE VERY BEST OF KATE ELLIOTT, visit the Tachyon page.

For more information on FALLING IN LOVE WITH HOMINIDS, visit the Tachyon page.

For more information about SLOW BULLETS, visit the Tachyon page.

For more information on THE MONSTROUS, visit the Tachyon page.

Lavie manages to keep his cool after reading some of the amazing pre-pub quotes (Photo: Kevin Nixon. © Future Publishing 2013.)

“If you want to know what SF is going to look like in the next decade, this is it.”
—Gardner Dozois, editor of the best-selling YEAR’S BEST
SCIENCE FICTION series

“A dazzling tale of complicated politics and even more complicated souls. Beautiful.”
—Ken Liu, Nebula, Hugo, and World Fantasy winner and author of THE GRACE OF KINGS

“If Nalo Hopkinson and William Gibson held a seance to channel the spirit of Ray Bradbury, they might be inspired to produce a work as grimy, as gorgeous, and as downright sensual as CENTRAL STATION.”
—Peter Watts, Shirley Jackson, Tähtivaeltaja, and Seiun award-winning author of BLINDSIGHT and
ECHOPRAXIA

“Lavie Tidhar weaves the threads of classic and modern science fiction tropes with the skills of a gene surgeon and creates a whole new landscape to portray a future both familiar and unsettling. A unique marriage of Philip K. Dick, William Gibson, C. L. Moore, China Miéville, and Larry Niven with 50 degrees of compassion and the bizarre added. An irresistible cocktail.”
—Maxim Jakubowski, author of the SUNDAY TIMES bestselling Vina Jackson novels

Reviewers, bloggers, and librarians get a copy of Ellen Datlow’s new anthology THE MONSTROUS

These copies are only for reviewers and librarians. For more details, visit NetGalley.

And while you are there, check out the other Tachyon titles for review.

From the best horror editor in the business comes a landmark horror anthology. Take a terrifying journey with literary masters of suspense, visiting a place where the other is somehow one of us. These electrifying tales redefine monsters from mere things that go bump in the night to inexplicable, deadly reflections of our day-to-day lives. Whether it’s a seemingly devoted teacher, an obsessive devotee of swans, or a diner full of evil creatures simply seeking oblivion, the monstrous is always there—and much closer than it appears.

THE MONSTROUS rises from the depths in October.

For the rest of the volume’s contents and and other details about The Year’s Best Science Fiction: Thirty-Second Annual Collection, visit SF Signal. 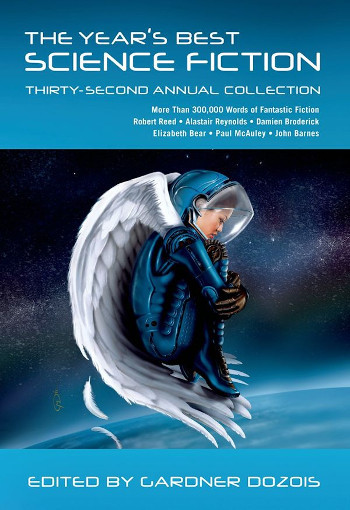 This is an ingenious first contact story, as technologically advanced aliens come to Earth to warn us about our imminent collision with a deadly spore cloud which will wipe out all human life on the planet in eight months’ time. They set up a floating Embassy in the harbor of New York City, where human and alien scientists work together day and night to find a defense against the spores, or a vaccine against the fatal disease the spores carry, or a cure for it, while the clock is running out and the Embassy suffers attacks from terrorists and fanatical anti-alien factions who believe that the aliens are Up To No Good, probably in cahoots with the Federal Government. As with all of Kress’s work, this is very nicely crafted, with well-paced prose that carries you through the story, complex human characters, a compelling and conflict-driven human story, a clever twist partway through, and an even cleverer twist at the end.

Nancy Kress may be less interested in baroque world-building, but as one of the most accomplished craftspeople in SF, she seems to have come to view the classic tropes less as themes to be revisited than as instruments to be orchestrated. Certainly the key elements in her novella Yesterday’s Kin at first seem thoroughly off-the-shelf – an enormous alien spacecraft appearing in New York Harbor, a mysterious force field surrounding the ship, an approaching cloud of space dust threatening all life on Earth, a desperate crash research program to mitigate the oncoming catastrophe, even the discovery of a new human haplogroup with far-ranging implications about the origins of humanity. We could almost be reading a mash-up of everything from Arthur Conan Doyle’s The Poison Belt and Fred Hoyle’s The Black Cloud (Hoyle is even mentioned), to Clarke’s Childhood’s End and The Day the Earth Stood Still, and even a few bits of Bear’s Darwin’s Radio. But Kress also invokes more recent themes that suggest the neurobiological SF of writers like Daryl Gregory, such as a popular drug that temporarily changes the user’s identity, and her own familiar themes involving evolutionary biology and the possible roles of junk DNA.

Kress has no problem making all this entertaining – that’s the nature of her professionalism – but how does she make it new? Even the opening scene is familiar, as the brilliant but unprepossessing biologist Marianne Jenner is whisked off from a faculty party by taciturn FBI agents, who reveal to her that the mysterious alien visitors want to meet her because of her discovery of a new human haplogroup. The relevance of that apparently unconnected research becomes clear as she finally meets the aliens and finds herself in a secret re-search project with some of the world’s top scientists. It turns out that the aliens, called Denebs, have identified a drifting cloud of spores which are fatal to human life and which will envelop the Earth in less that a year’s time. The mission of Marianne’s team is to – well, to Do Something.

Somehow it all works, and Yesterday’s Kin offers the efficient pleasures of a short novel told with almost brutal efficiency, recalling at times those old paperbacks sold as full-length novels, though they were barely longer than this one. Kress could easily have pumped this up to three times its length – it has enough ideas to sustain it – but she chooses instead to offer brief family encounters punctuated by brief synopses of major developments; a riot that could easily fill a chapter is dismissed in a couple of pages, but still manages to get in a major plot point concerning Noah.

Kress’s clear prose and deft strokes of character add to the sense of a much larger canvas done almost in miniature, and her ideas, even when somewhat familiar, are as compelling as always. She is, as I mentioned earlier, a hard SF writer in the classic mold, and she shows us that the form still has a lot of life in it.

Read the rest of Dozois’ and Wolfe’s reviews in the September 2014 issue of Locus.